So a few years ago, I announced TeensyDSC, project that brings telescope digital setting circles to the iPad and Android devices using WiFi. I’ve been using my TeensyDSC successfully with my telescope and SkySafari on an iPad for a few years, but one thing always bothered me about it: the “COGS” (cost of goods sold) of the TeensyDSC was really expensive: nearly $100. A lot of that cost was in two parts: the Teensy 3.1 ($20) and RN-XV WiFi module ($35).

I always wanted to redesign the board around a cheaper solution, but a lot of the alternatives I examined didn’t seem to be significantly cheaper to warrant the effort. Then the Espressif ESP-12E module based on the ESP8266 was released which in theory could replace both the Teensy and RN-XV for less then $5!

There’s still some question in my mind if the ESP-12E is powerful enough to handle both WiFi communications and encoder duties- especially I use high resolution encoders like the ones I have. But I figured the only way to find out was to build a board and test things. Hence, I created the ESP-DSC: 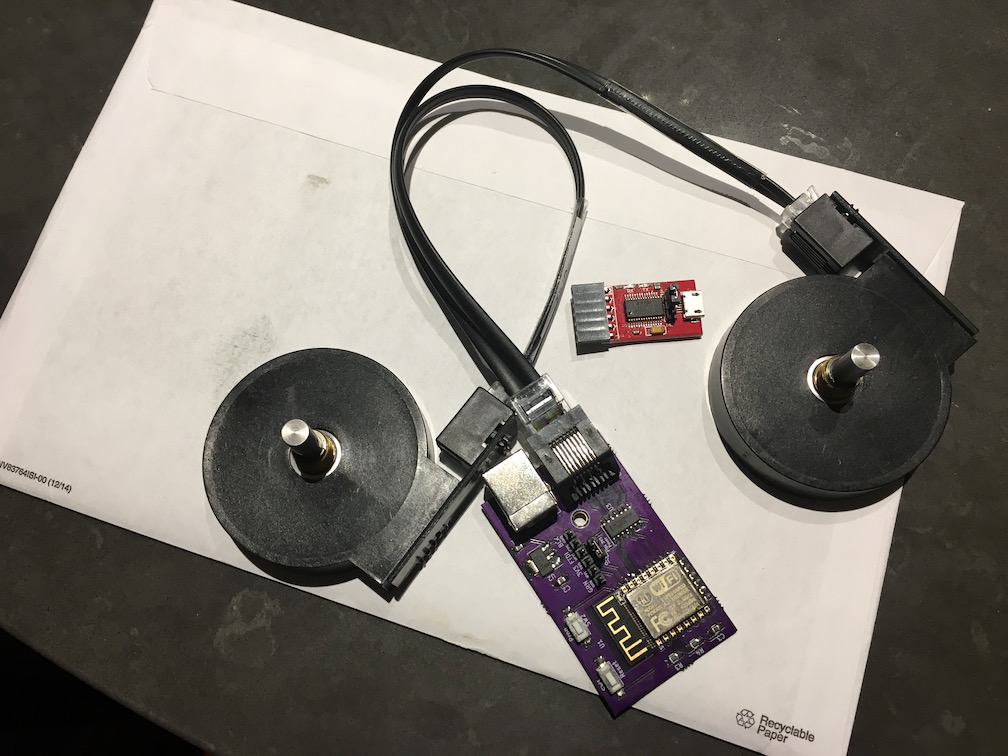 Prototype of ESP8266 based digital setting circles for a telescope

As you can see, I’ve designed the board in KiCad and populated it. I found that I never used the 12V barrel adapter for power, so I removed that (saved another $5) and instead plan to power this via a USB power bank like I do with the TeensyDSC out in the field. Since the ESP-12E doesn’t have a built in USB port for programming and debugging like the Teensy 3.1 does, I added a header for connecting a FTDI board (small red board in the photo).

The next step will be to code up a proof-of-concept to validate if the ESP-12E is fast enough to handle double duty. My first pass will be in the Arduino/Processing framework as that is what I’m most familiar with. Realistically speaking though, I don’t think that will provide the best performance so I may have to use one of the SDK’s that work closer to the actual hardware. The key thing will be making sure that I use hardware interrupts on the 4 encoder pins and service the WiFi connection often enough for tracking to be smooth and accurate.

One other major change between this and TeensyDSC is that I plan on making the board as small as possible to keep costs down and not worry about fitting the board into a COTS (commercial off the shelf) plastic enclosure. Instead, I will be publishing the necessary files so that people can 3D print their own enclosure. This will include the original AutoDesk Fusion360 and industry standard “STL” file.