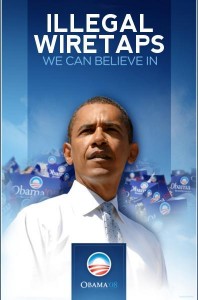 Benjamin Franklin once said, “They that can give up essential liberty to obtain a little temporary safety deserve neither liberty nor safety.”

Obama’s one-eighty on the so-called “compromise” FISA bill which eviscerated the 4th Amendment and gave President Bush the immunity he asked for even after Chief Judge Vaughn Walker of the U.S. District Court in California ruled that the president lacks the authority to disregard the original FISA law shows Mr. Obama appears to be more interested in talking about change then actually causing it.

Actions speak louder then words; and those of us who care about the freedoms that countless American lives have been sacrificed to protect have heard what Mr. Obama really believes loud and clear.

Will I still vote for Obama? Yes. But, he’s gone from the “best candidate” to the “least worst”. I just can’t see myself contributing to his campaign anymore.