KC wasn’t able to make it up this round which was going to suck and not just because it meant I’d be without A/C either- KC has been a great mentor for me all year and it seems I need someone to kick me the pants lately and KC has been more then happy to oblige.

Instead, I stopped by BRG on the way up to the track on Friday and we talked about where I was loosing time and goals I should set for myself. KC said he thought I could do a 2:02 and I think I laughed. I mean, drop 3 seconds in a weekend? Riiiiight. Seemed like a big step at this point. But I’ve learned to listen to KC and so I told him I’d push harder this round in practice and try to build off that in the races. Honestly, I would of been happy with just improving my times at all.

Saturday was really hot, but enjoyed hanging out with Quinton, Ben and Andre. I think I drank close to two gallons of water/gatorade trying to stay hydrated in the 100 degree heat. Once again, I was having a hard time getting down to my race pace in practice, doing a bunch of 2:10-09’s with a few 08’s. I know this really holds me back, because when I work with Jim and Dave at Catalyst Reaction on suspension setup, you can’t really setup the bike for how it will behave when you’re going 4sec a lap faster. I had Chris and the gang at CT Racing put a new Pirelli rear on at lunch and the bike felt a lot better through Turn 7, but my lap times didn’t really improve. Honestly, I was a bit disappointed.

Sunday morning, things were a lot cooler and I felt refreshed from sleeping 8+ hours the night before. I seemed to have finally have figured out an eating strategy which gives me plenty of energy all day without that post-lunch food coma. In morning warmup, I get into the 2:07’s- finally getting close to my race pace in practice. The cycling I’ve been doing the last month or so has helped with my stamina and so I can’t wait to get out on track again. I won’t have to wait long, because 650 Twins is the first race of the day.

I get another poor start off the line and I make it worse by getting hung out to dry on the outside of T1 and then trying to make up for it in T2 and finding myself way off line on the outside. I end up a few bike lengths behind Stephen Smith (#769) once again and quickly reply our battle in my head from last round remembering where each of us is stronger then the other. I try taking Stephen on the brakes on the inside into T10 and once again can’t make it happen. However someone crashes in 11/12 and it seems to hold Stephen up a little and so I’m able to get a much better drive out of T13 and easily make the pass on the back straight.

Just up ahead I see Charles Almy (#510). I know Charles has been faster then me all year and I hope for a tow from him to gap Stephen. I keep it relatively close for a couple of laps and then Charles starts to pull away and I end up having a pretty quiet race. I end up dropping a second off my personal best with a couple of 2:04’s and followed up with consistent 2:05’s. So far so good!

After the race I talk to Dave and Jim at Catalyst about my line through 6 because I know it’s killing my drive through one of the fastest parts of the track: turns 7 & 8. I know if I can just hit the apex in 6 I’ll have a 2:03 in the bag. Jim makes a rebound adjustment on the rear and I’m good to go. On the warm up lap of 650 Production I look for the turn in marker we talked about and burn it into my mind for the race.

Another blah launch off the line, but Patrick Murphy (#752) in the row in front of me does a nice wheelie for the crowd and Stephen Smith (#769) and I split him down the front straight. I find myself right on Charles’ tail going into Turn 1 and decide I’m not going to let him get away from me this time. And that’s when Patrick comes around me on the outside in T2- crap, that won’t help. I follow Patrick and Charles goes wide on the exit of 14 and gets a bad drive out of 15. I’m too far back to take advantage of it, but Patrick gets past Charles on the front straight. I find myself once again on Charles’ tail hoping to find an open door of my own past.

On the second lap I get a good drive out of 15 and think about drafting past Charles, but he’s good on the brakes into T1 and I know I can’t get by so I just slip back behind him on the exit. Charles gets a great drive out of Turn 2 and takes Patrick back on the outside of T3 and there’s now four of us nose to tail going through turn 3 each hoping the guy in front of us makes a mistake that we can capitalize on.

Up the hill into 5 and down the other side- I look ahead for the marks on the track that Dave and Jim talked about for T6 and that ends up helping a lot. We all get a good drive out of 6 and speed through 7, grabbing gears when the tach hits about 10,500RPM and holding the throttle wide open for as long as I dare for the entrance into Turn 8.

Turn 8 isn’t really “hard”- meaning it’s not that technical of a corner. It’s just one of those turns where you just have to turn off that part of your brain related to self preservation because you can go through there a lot faster then it seems you can. Simply put: Turn 8 takes balls.

And this is where things get confusing. Very confusing. It’s funny how when things go way wrong how quickly you start questioning yourself. At first I thought I turned in way too early- a common mistake when you start going faster and that self preservation mode kicks in and that’s what caused me to miss the apex by a mile and go way way wide. But after looking at my on board video, I know that’s not what happened at all.

What I do know is this: I turned the bike in at my turn in point and the bike rather then carving a nice corner, pretty much kept going straight. This is generally considered a bad thing at over 90mph when a turn is coming up. After passing the apex, I quickly realized I wasn’t going to make the turn stood the bike up and got on the front brake right up until I reached the dirt and then started pumping the rear brake instead. It wasn’t my first off road experience and looking back, I have to say the rear was bouncing around a lot more then I’ve grown to expect from past experiences… more on that later.

After about a second while riding along the dirt I figured I’d be ok- I’d ride it out and get back on course. About a half of a second after that, I realized that the ditch up ahead had different plans for me. Lucky, the bike didn’t fully catch the ditch and rather then flying over the bars I held on for another brief moment before deciding that I didn’t really want to be still on the bike when it fell down and so I pushed off the bike.

I landed only a few feet from where the bike stopped with the earthy flavors of dirt and dry grass in my mouth. You’d think that hitting a ditch with your front wheel at high speed and jumping off a bike would hurt. You’d be right- bruised ribs from hitting the gas tank when I hit the ditch hurt like hell, but I walked away without any other injury whatsoever (thanks again Helimot!). I might go invest in a chest protector though. :)

As we unloaded the bike off the crash truck, Jim from Catalyst gave me that look of “Dude, *WTF* is wrong with your bike?” Even though the front end had taken the brunt of the impact, it looked perfectly fine to me- as did my fairings/bellypan, gas tank and just about everything else you’d expect damaged in a crash like this. The only thing I noticed was a badly dented silencer and snapped shift rod linkage- the crash just sounded a lot worse then it really was. What I hadn’t noticed and Jim had, was that the frame had snapped where the shock linkage mounts to the frame which meant I was now the proud owner of a 650cc twin drag bike: 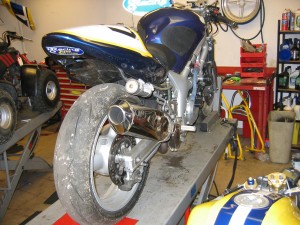 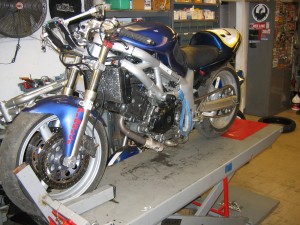 After further inspection, it appears that the frame had been cracked at the weld for a long time and that it finally let go in full accordance to Murphy’s Law right about the time I turned it in for turn 8. That would explain why the bike didn’t want to turn and the rear was bouncing so much once on the dirt. For the record, it’s a 1999 frame and it’s been a race bike for almost it’s entire life, so it’s hardly had an easy life. Still though, if you’ve got an SV, especially a first gen, I’d highly recommend you inspect the welds for cracks- especially at the bottom of the frame. 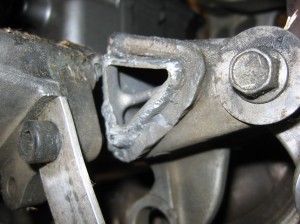 One thought on “AFM Round 7: Well That Was Fun”