The comic xkcd makes the point that when you “buy” DRM’d software, music or movies that you’re really at the mercy of the company who controls the DRM and they can effectively revoke your access for any reason just as Walmart threatened to do recently. Of course, once the company locks you out of the content you paid for you either have to pay for it again or break the law by bypassing the DRM. Hence, you’re probably better off pirating the software, music or movie in the first place- if you’re going to break the law there really isn’t any point paying for it in the first place since laws like the DMCA don’t care if you paid for it or not. 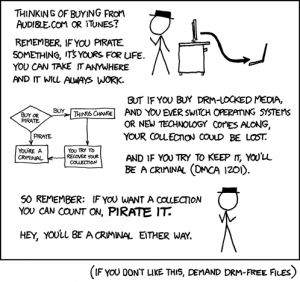 I found this really amusing. McCain’s campaign wrote a letter to YouTube requesting that they give special preference to political videos when receiving DMCA takedown notices. Basically some people are claiming the McCain campaign is violating their copyright by including music, video, etc in their YouTube videos and are demanding the videos be removed. END_OF_DOCUMENT_TOKEN_TO_BE_REPLACED

Dan Rather’s excellent investigative report on electronic voting asks questions which haven’t gotten a lot of press lately. Ignoring the continued problems with the software running on these voting machines, Dan Rather looks at the hardware itself. END_OF_DOCUMENT_TOKEN_TO_BE_REPLACED

How many ways do I hate thee? Let me count the ways:

So there’s an on-going argument about Stillsecure’s use of Snort.
END_OF_DOCUMENT_TOKEN_TO_BE_REPLACED

So maybe it’s just me, but it seems that these “confidentiality notices” in emails are on the rise.

Anyways, I’ve decided to do a little experiment. Many of these notices contain verbage to “notify the sender” if you receive the email… what will happen when I start replying? Hillarity? Confusion? Bogus legal threats? A bore? Only one way to find out…

The EFF has written a great piece on how the Digital Millenium Copyright Act (DMCA) has really effected the country. Unsurprisingly to many in the technical community, the DMCA hasn’t been used to stop would-be copyright infringers, but rather to stifle innovation, threaten scientists, restrict free use and threaten free speech.

Michael Crichton wrote a great opt-ed piece for the New York Times called, This Essay Breaks the Law. It’s a great two pager on how the patent system in the US has gone to hell and how it will effect not just large corporations, but you and your family.

Btw, don’t read this next sentance, because just merely thinking it is illegal:

Elevated homocysteine is linked to B-12 deficiency, so doctors should test homocysteine levels to see whether the patient needs vitamins.

Every so often, the US Copyright Office takes comments regarding the DMCA (the law which makes it a crime to use products you paid for in ways other then the creator intended). Most recently, Sony-BMG (a member of the RIAA) added DRM technology to music CD’s (actually, technically, they’re not a real music CD because of the DRM, hence they don’t carry the CD logo) which ended up creating a security hole on people’s computers. This security hole was then abused by other people (criminals to be precise) to break into those computers.

In response, people like Ed Felton requested the the USCO grant an exception to the DMCA which would allow users to remove DRM software which caused harm for the end users. Others asked for an excemption which covered DRM which, “employ access control measures which threaten critical infrastructure and potentially endanger lives.”

Shame on Yahoo, Microsoft and Google. But part of me understands. For better or worse, companies are ultimately responsible to their shareholders, not morals or concepts of right and wrong. Even Google’s motto of “Do no evil” is convienently pushed aside when it becomes monetarilay inconvient.

But perhaps the most scary thing is that Microsoft couldn’t say under oath wether or not IBM should be ashamed for helping the Nazi’s. I guess if even in hindsight you can’t figure out what is wrong, how can you be expected to know right here and now?